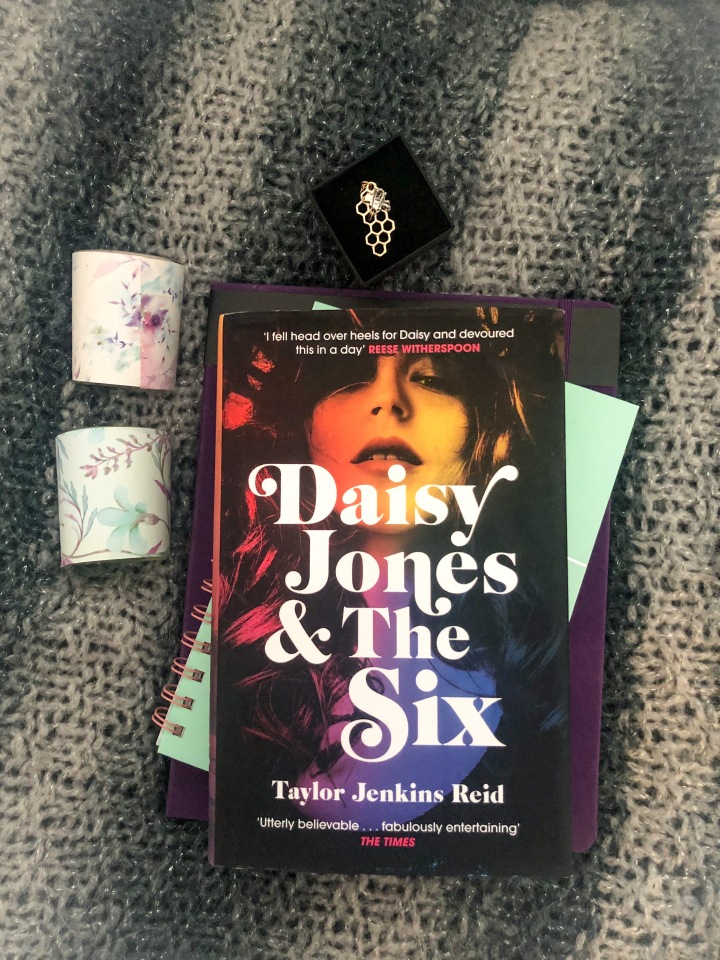 Okay, it’s been a little while since my last review, mainly because I’ve been insanely busy at work, caught a bug and then needed some serious TLC, which resulted in binge-watching ten seasons of Friends!

I have managed to make quite a dent in my TBR pile though, which is fantastic. I just haven’t quite gotten around to blogging about my reading activity until now.

Earlier this month, I raced through Daisy Jones and the Six and I mean RACED through it, mainly because it was absolutely brilliant!! January tends to be a typically strong reading month for me, but it’s always great to stumble across a gem of a novel, like Daisy Jones, this early on in the year because it continues to inspire my reading activity.

Daisy Jones and the Six was honestly wonderful and, dare I say it, one of my favourite books EVER.

Firstly, the book is responsible for quite possibly my favourite literary quote of all time.

“I had absolutely no interest in being somebody else’s muse.
I am not a muse.
I am the somebody.
End of fucking story.”
– Daisy Jones

My favourite characters in any story, whether it be told through books, films or TV shows, are always those intriguingly beautiful, yet massively flawed people and Daisy certainly ticked that box. She was eccentric, strong, troubled and selfish all at the same time and, because of this, she was a creative genius.

I adored the relationship between Daisy and Billy. It was exciting and glorious, while also being frustrating and heartbreaking. The author’s entire approach to telling the story was great. There was no huge, game-changing moment in the relationship for me, instead I was just obsessed with how Taylor Jenkins Reid gently weaved their feelings into the band’s overall story. I thought it was a fantastic approach to take.

I’ve never read anything with a structure quite like this book before, where the entire story is conveyed through an interview format, and I was pleasantly surprised with how much I enjoyed it. The narrative style really added a new dimension to the band’s bold story and it was fascinating to see the characters remembering the same situation so differently.

For me, Reid’s focus on the perceptions and scrutiny of women in the music industry is the best part of the novel. It’s so timely and I loved how the topic was explored with both Daisy and Karen. Daisy’s struggles early on in the book, where she was torn between being herself and wanting to be commercially successful, was beautifully done. But it was Karen’s struggles with constantly being overlooked in favour of her male bandmates and dealing with sociological expectations of women that really resonated with me (keeping it vague to avoid spoilers!) Reid was successful in highlighting that this is still happening to women today, across so many different industries, and it’s a really powerful, poignant message.

The rock and roll world that Daisy and the Six lived in felt so real to me and I’m still having a hard time believing that it’s actually fiction. For days after finishing the book, I genuinely felt a little bit lost. Thankfully, the story is being turned into a TV show and I cannot wait to return to Daisy’s world by screen!

Have you read Daisy Jones and the Six? Let me know your thoughts – I’d love to hear them!

7 thoughts on “Review: Daisy Jones and the Six by Taylor Jenkins Reid”

Forever searching for where the sky touches the sea 🌅
Forever my favourite human to share padrón peppers and sangria with 🫑🍷 @patwisedale46 x
📚What’s my favourite part of holiday prep? Settling on my reading list…
A quick 📸 of some bookish delights I have recently enjoyed…
🎪🎸Why do I actively choose to spend my weekends in a crowded, muddy field with minimal access to clean bathroom facilities? Something I often ponder, while simultaneously wondering if i’m getting too old for this shit.
You can’t sass with us 💁🏻‍♀️✨